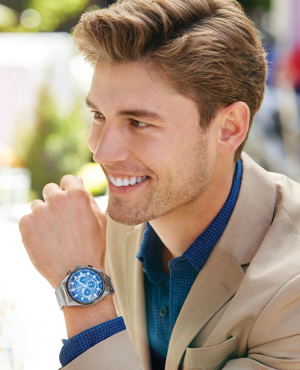 A recent news story about Kanye West explains why he rarely smiles in his photos. Seems he got his hands on a book from the 1800s in which the people in the photos didn’t smile. His explanation was that it wouldn’t “look cool” for paintings of people in an old castle to be smiling. So he adopted the idea of not smiling in an effort to look his coolest.

Interestingly enough, his better half, Kim Khardashian, has her own take on why she keeps her smiles to a minimum. Her concern is that smiles cause wrinkles.

Whatever your reason for not wearing your best smile – missing teeth, yellow teeth, or even wrinkles – your Beverly Hills cosmetic dentist there are plenty of reasons why you might want to rethink your position.

If you want to be successful, according to Sam Parker’s book Smile and Move, all you need to do is smile and move. In short, treat people with respect, enjoy what you do, and go beyond expectations – all with a smile.

Parker isn’t the only person who knows that smiles and success go hand in hand. A study of a group of women over a thirty-year period found that those with genuine smiles in their college yearbook photos had “happier marriages and greater well-being.” Additionally, as part of the same study, strangers looking at the photos judged the women who smiled as more positive and competent.

Finally, your Century City cosmetic dentist read a study completed by Invisalign back in 2012 found that very often people make snap judgments about others based on visual cues such as hair, skin, and clothing. In fact, even the “alignment of teeth is a catalyst for assumptions regarding success, popularity, intelligence, and general health.” However, there’s more to smiling than just what others think.

Wearing Your Best Smile has Benefits

Smiling has benefits. Specifically, your Beverly Hills cosmetic dentist wants you to know that smiling can improve your life through better health.

According to a study of nearly 170 students published in the journal Psychological Science, smiling appeared to lower heart rates especially after stressful events. That’s not all. Smiling may offer other beneficial effects as well.

University studies have shown that a positive attitude – including smiling – lead to a healthy life. Experts have noted that smiling can help:

Overall, smiling is a good thing, something that most people should do more. However, if you find you don’t smile because you’re embarrassed by chipped, cracked, missing, discolored, and crooked teeth, it’s time to talk to your Century City cosmetic dentist about making a change.

HOW IT WORKSNote: 800 Numbers are not allowed